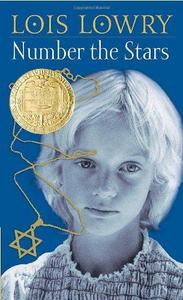 Number the Stars is a work of historical fiction by the American author Lois Lowry about the escape of a Jewish family, the Rosens, from Copenhagen, Denmark, during World War II. The story centers on ten-year-old Annemarie Johansen, who lives with her mother, father, and sister Kirsti in Copenhagen in 1943. Annemarie becomes a part of the events related to the rescue of the Danish Jews, when thousands of Jews were helped to reach neutral ground in Sweden to avoid being relocated to concentration camps. She risks her life to help her best friend, Ellen Rosen, by pretending that Ellen is Annemarie's late older sister, Lise, who was killed earlier in the war by the Nazi army because of her work with the Danish Resistance. However, her former fiancé, Peter, who is partly based on the Danish resistance member Kim Malthe-Bruun, continues to help them. The story's title is taken from a reference to Psalm 147:4 in which the writer relates that God has numbered all the stars and named each of them. It ties into the Star of David, which is worn by Ellen Rosen on her necklace and is a symbol of Judaism. The novel was awarded the Newbery Medal in 1990 as the previous year's "most distinguished contribution to American literature for children."Lowry traveled to Copenhagen to conduct research and interviews for the book. She took the photo of the girl used for the cover (shown in infobox), which was used on many editions of the book. The Swedish girl used for the cover of the book went by the name of Anna Caterina Johnson, and had been photographed when she was 10 by Lois Lowry.
Read more or edit on Wikipedia