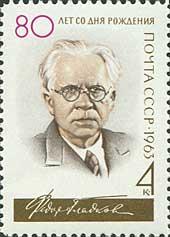 Feodor Vasilyevich Gladkov (Russian: Фёдор Васильевич Гладков) June 21 [O.S. June 9] 1883 – December 20, 1958) was a Soviet and Russian socialist realist writer. Gladkov joined a Communist group in 1904, and in 1905 went to Tiflis (now Tbilisi) and was arrested there for revolutionary activities. He was sentenced to three years' exile. He then moved to Novorossiysk. Among other positions, he served as the editor of the newspaper Krasnoye Chernomorye, secretary of the journal Novy Mir, special correspondent for Izvestia, and director of the Maxim Gorky Literature Institute in Moscow from 1945 to 1948. He received the Stalin Prize (in 1949) for his literary accomplishments, and is considered a classic writer of Soviet Socialist Realist literature.
Read more or edit on Wikipedia