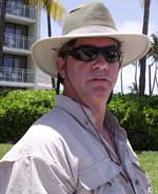 John Ringo (born March 22, 1963) is an American science fiction and military fiction author. He has had several New York Times best sellers. His books range from straightforward science fiction to a mix of military and political thrillers. He has over seven million copies of his books in print, and his works have been translated into seven different languages.
Read more or edit on Wikipedia