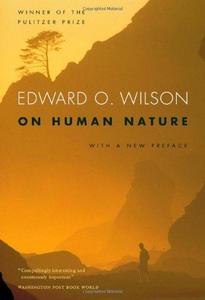 On Human Nature (1978; second edition 2004) is a book by the biologist E. O. Wilson, in which the author attempts to explain human nature and society through sociobiology. Wilson argues that evolution has left its traces on characteristics such as generosity, self-sacrifice, worship and the use of sex for pleasure, and proposes a sociobiological explanation of homosexuality.He attempts to complete the Darwinian revolution by bringing biological thought into social sciences and humanities. Wilson describes On Human Nature as a sequel to his earlier books The Insect Societies (1971) and Sociobiology: The New Synthesis (1975). The book won the Pulitzer Prize in 1979.
Read more or edit on Wikipedia