Sheryl WuDunn (born November 16, 1959) is an American business executive, writer, lecturer, and Pulitzer Prize winner. A senior banker focusing on growth companies in technology, new media and the emerging markets, WuDunn also works with double bottom line firms, alternative energy issues, and women entrepreneurs. She has also been a private wealth adviser with Goldman Sachs and was previously a journalist and business executive for The New York Times. She is now senior managing director at Mid-Market Securities , a boutique investment banking firm in New York serving small and medium companies. At the Times, WuDunn ran coverage of global energy, global markets, foreign technology and foreign industry. She oversaw international business topics ranging from China's economic growth to technology in Japan, from oil and gas in Russia to alternative energy in Brazil. She was also anchor of The New York Times Page One, a nightly program of the next day's stories in the Times. She also worked in the Times's Strategic Planning Department and in the Circulation Department, where she ran the effort to build the next generation of readers for the newspaper. She was one of the few people at the Times who went back and forth between the news and business sides of the organization. She was the first Asian-American reporter hired at the Times and was a foreign correspondent in The New York Times Beijing and Tokyo bureaus. She speaks Chinese and some Japanese. While in Asia, she also reported from other areas, including North Korea, Australia, Burma and the Philippines. WuDunn, recipient of honorary doctorates from University of Pennsylvania and Middlebury College, was a senior lecturer at Yale University's Jackson Institute for Global Affairs in the fall of 2011. She is a commentator on China and global affairs on television and radio shows, including Bloomberg TV, NPR, The Colbert Report and Charlie Rose, and has lectured at the International Monetary Fund and World Bank and the Council on Foreign Relations.
Read more or edit on Wikipedia 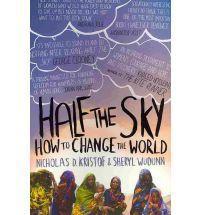 Half the Sky: Turning Oppression into Opportunity for Women Worldwide

Thunder from the East