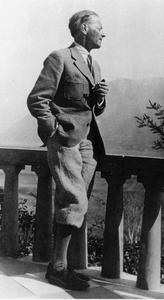 Rudolf Olden (January 14, 1885 in Stettin – September 18, 1940) was a German lawyer and journalist. In the Weimar period he was a well-known voice in the political debate, a vocal opponent of the Nazis, a fierce advocate of human rights and one of the first to alert the world to the treatment of Jews by the Nazis in 1934. He is the author of Hitler der Eroberer. Entlarvung einer Legende ("Hitler the Conqueror, Debunking of a Myth") which is considered part of the German exile literature. The book was promptly banned by the Nazis. Shortly after its publication by Querido in Amsterdam, Olden's citizenship was revoked and he emigrated, together with his wife, first to the United Kingdom and then, in 1940, to the United States. On September 18 both died in the U-boat attack on the SS City of Benares in the Atlantic. He was a German Liberal of the best sort, rather more pugnacious than the average British Liberal, because he had more to fight against.
Read more or edit on Wikipedia