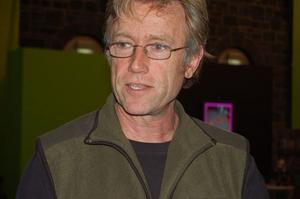 Paul Collins (born 21 May 1954) is an Australian writer and editor who specializes in science fiction and fantasy. Collins has written many books for younger readers. He is best known for his fantasy series, The Jelindel Chronicles (Dragonlinks, Dragonfang, Dragonsight and Wardragon), and The Quentaris Chronicles (Swords of Quentaris, Slaves of Quentaris, Dragonlords of Quentaris, Vampires of Quentaris, Princess of Shadows, The Forgotten Prince and The Spell of Undoing), and his science fiction series, The Maximus Black Files (Mole Hunt, Dyson's Drop and The Only Game in the Galaxy). Paul's latest fantasy books, written in collaboration with Sean McMullen, are six titles in The Warlock's Child series: The Burning Sea, Dragonfall Mountain, The Iron Claw, Trial by Dragons, Voyage to Morticas and The Guardians. In addition to his novels, Collins has written over a hundred chapter books, around thirty non-fiction hardcovers for the education market (published both in Australia and the USA), and 150 short stories, the best of which appeared in two collections. He co-edited four boxed sets of anthologies with Meredith Costain (Spinouts and Thrillogies), edited around fifteen trade anthologies, and was the principal editor of The MUP Encyclopaedia of Australian Science Fiction and Fantasy.
Read more or edit on Wikipedia