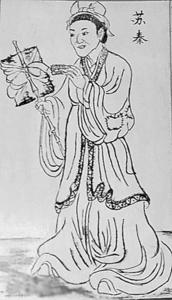 Su Qin (380–284 BCE), was an influential political strategist during the Warring States period of ancient China. He was born in Chengxuan Village, Luoyang in present-day Henan Province. According to legend Su Qin was a disciple of Guiguzi, the founder of the School of Diplomacy. He was the chief advocate of the Vertical Alliance system, which sought to create an alliance of the other states against the state of Qin. The opposing theory, "Horizontal Alliance" (Chinese: 聯横; pinyin: Lían Héng) supported alliances with the State of Qin. After finishing his studies with Guiguzi, Su Qin travelled for several years and on his return lamented that "My wife doesn't recognize me as her husband, my sister-in-law doesn't recognize me as her brother-in-law, and my parents don't recognize me as their son!". All these misfortunes he blamed on himself and he thereafter shut himself in his room to study. To prevent falling asleep from long hours of study, he would stab himself in the thigh with a sharp instrument. This practice gave rise to part of a Chinese idiom or "chengyu" simplified Chinese: 悬梁刺股; traditional Chinese: 懸梁刺股 which means "to study assiduously and tirelessly". Years later, when Su Qin returned with full honors following his success with the Vertical Alliance system, his family received him with great reverence, causing him to remark on their change of behavior towards him, leading to the rise of another Chinese idiom simplified Chinese: 前倨后恭; traditional Chinese: 前倨後恭 which means "a change of attitude from arrogance to respect". At his most brilliant Su Qin persuaded the leaders of the six kingdoms of Qi, Chu, Yan, Han, Zhao and Wei to unite against the Qin state through the use of his splendid rhetoric and thereafter wore robes decorated with the insignia of the six states. The allies of the Vertical Alliance advanced on the State of Qin but were easily defeated due to internal discord between the former enemies. One theory suggests that he and Zhang Yi mutually reinforced each other's viewpoints in order to achieve their personal goals.
Read more or edit on Wikipedia