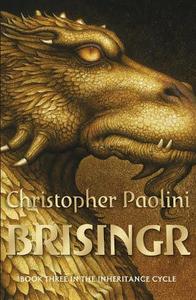 Brisingr is the third novel in the Inheritance Cycle by Christopher Paolini. It was released on September 20, 2008. Originally, Paolini intended to conclude the then Inheritance Trilogy in three books, but during writing the third book he decided that the series was too complex to conclude in one book, because the single book would be close to 1,500 pages long. A deluxe edition of Brisingr, which includes removed scenes and previously unseen art, was released on October 13, 2009. Brisingr focuses on the story of Eragon and his dragon Saphira as they continue their quest to overthrow the corrupt ruler of the Empire, Galbatorix. Eragon is one of the last remaining Dragon Riders, a group that governed the fictional nation of Alagaësia, where the series takes place. Brisingr begins almost immediately after the preceding novel Eldest concludes. Published by Alfred A. Knopf Books for Young Readers, an imprint of Random House Children's Books, the book sold 550,000 copies on its first day of sale, a record for a Random House children's book. The novel debuted at number one on USA Today's top 150 bestsellers list. Reviewers criticized the book for its length, while commenting on Paolini's growing maturity in his treatment of characters.
Read more or edit on Wikipedia