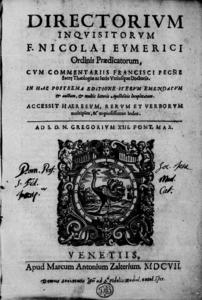 Nicholas Eymerich (Catalan: Nicolau Eimeric) (Girona, c. 1316 – Girona, 4 January 1399) was a Roman Catholic theologian in Medieval Spain and Inquisitor General of the Inquisition in the Crown of Aragon in the later half of the 14th century. He is best known for authoring the Directorium Inquisitorum, that mostly summarized previous texts and mores.
Read more or edit on Wikipedia