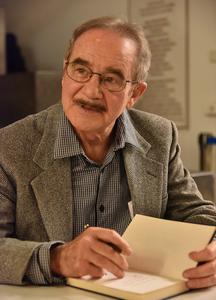 Henryk Grynberg (born 1936 in Warsaw) is a Polish writer and actor who survived the Nazi occupation. He is a novelist, short-story writer, poet, playwright and essayist who had authored more than thirty books of prose and poetry and two dramas. Grynberg, known as the “chronicler of the fate of the Polish Jews”, tackled in his writings the Holocaust experience and the post-Holocaust trauma.
Read more or edit on Wikipedia