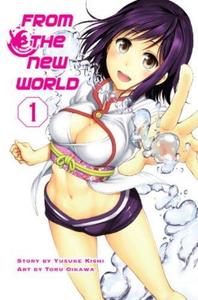 From the New World

From the New World (Japanese: 新世界より, Hepburn: Shin Sekai Yori) is a Japanese novel by Yusuke Kishi, originally published in 2008 by Kodansha. It is titled after Antonín Dvořák's Symphony No. 9 "From the New World", whose Movement II appears in the story several times.The story received a manga adaptation with slight disparities in Kodansha's Bessatsu Shōnen Magazine, which was serialized between May 2012 and June 2014, and an anime television series adaptation by A-1 Pictures, which aired in Japan between October 2012 and March 2013. In North America, the manga has been licensed by Vertical (itself an imprint of Kodansha USA) and the anime by Sentai Filmworks. From the New World received the 29th Nihon SF Taisho Award in 2008.
Read more or edit on Wikipedia