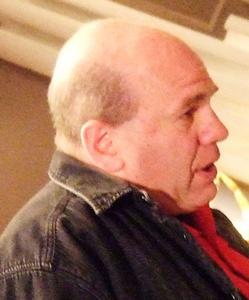 David Judah Simon (born February 9, 1960) is an American author, journalist, and television writer and producer best known for his work on The Wire (2002–08). He worked for The Baltimore Sun City Desk for twelve years (1982–95), wrote Homicide: A Year on the Killing Streets (1991), and co-wrote The Corner: A Year in the Life of an Inner-City Neighborhood (1997) with Ed Burns. The former book was the basis for the NBC series Homicide: Life on the Street (1993–99), on which Simon served as a writer and producer. Simon adapted the latter book into the HBO mini-series The Corner (2000). He was the creator, executive producer, head writer, and show runner for all five seasons of the HBO television series The Wire (2002–2008). He adapted the non-fiction book Generation Kill into a television mini-series, and served as the show runner for the project. He was selected as one of the 2010 MacArthur Fellows and named an Utne Reader visionary in 2011. Simon also created the HBO series Treme with Eric Overmyer, which aired for four seasons. Following Treme, Simon wrote the HBO mini-series Show Me a Hero with journalist William F. Zorzi, a colleague first at The Baltimore Sun and again later on The Wire. Simon and frequent collaborator George Pelecanos reunited to create original series The Deuce. The drama about the New York porn industry in the 1970s and 1980s starred producer Maggie Gyllenhaal and executive producer James Franco, and aired from 2017 to 2019. Simon's next series, The Plot Against America, debuted in 2020. We Own This City was developed and written by George Pelecanos and Simon, and directed by Reinaldo Marcus Green. The six-episode limited series premiered on HBO on April 25, 2022.
Read more or edit on Wikipedia