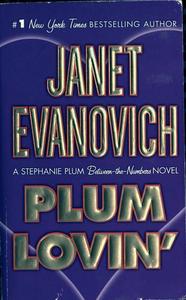 Plum Lovin' is a 2007 novel by Janet Evanovich. It is the 14th book in the Stephanie Plum series. In this Valentine's Day between the numbers novella bounty hunter Stephanie Plum is tracking down Annie Hart, a relationship expert, who was charged with armed robbery. According to Stephanie's file Hart stole a necklace from a pawn shop owned by Stanley Cramp and shot him in the foot. Vinnie is worried that if Hart isn't brought in soon he won't be able to afford the big champagne Valentine's Day cruise he is supposed to take with his wife Lucille. Diesel is back and he's hunting down Bernie Beaner. Bernie's marriage of thirty-five years has apparently gone down the crapper and he's blaming another Unmentionable for it, Annie Hart. Until Diesel can take care of Bernie Beaner he's keeping Annie Hart in protective custody. The only problem is that Annie won't give up her work and has Diesel promise to make sure all of her clients have a good Valentine's Day. Diesel passes this task off to Stephanie for a hundred dollars and a promise that she won't have to do anything illegal or life-threatening.
Read more or edit on Wikipedia

Plum and Posner's Diagnosis of Stupor and Coma

The Plum In The Golden Vase Or Chin Ping Mei