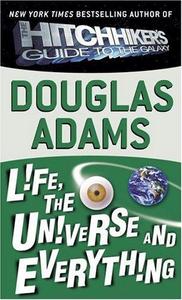 Life, the Universe and Everything

Life, the Universe and Everything (1982, ISBN 0-345-39182-9) is the third book in the five-volume Hitchhiker's Guide to the Galaxy science fiction "trilogy" by British writer Douglas Adams. The title refers to the Answer to Life, the Universe, and Everything. The story was originally outlined by Adams as Doctor Who and the Krikkitmen to be a Tom Baker Doctor Who television six-part story, but was rejected by the BBC. It was later considered as a plotline for the second series of the Hitchhiker's TV series, which was never commissioned. A radio adaptation of Life, the Universe and Everything was recorded in 2003 under the guidance of Dirk Maggs, starring the surviving members of the cast of the original Hitchhiker's radio series. Adams himself, at his own suggestion, makes a cameo appearance; due to his death before production began on the series, this was achieved by sampling his character's dialogue from an audio book of the novel read by Adams that was published in the 1990s. The radio adaptation debuted on BBC Radio 4 in September 2004.
Read more or edit on Wikipedia