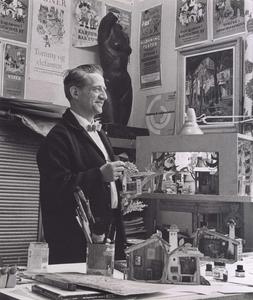 Thorbjørn Egner (12 December 1912 – 24 December 1990) was a Norwegian playwright, songwriter and illustrator known principally for his books, plays and musicals for children. He is principally associated with his narratives for children including Karius og Baktus (1949) and Folk og røvere i Kardemomme by (1955).
Read more or edit on Wikipedia