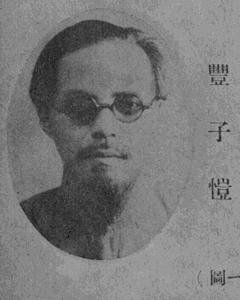 Feng Zikai (simplified Chinese: 丰子恺; traditional Chinese: 豐子愷; pinyin: Fēng Zǐkǎi; November 9, 1898 – September 15, 1975) was an influential Chinese painter, pioneering manhua (漫画) artist, essayist, and lay Buddhist of twentieth-century China. Born just after the First Sino-Japanese War (1894–1895) and passing away just before the end of the Cultural Revolution (1966–1976), he lived through much of the political and socio-economic turmoil that arose during the birth of modern China. Much of his literary and artistic work comments on and records the relationship between the changing political landscape and the daily lives of ordinary people. Although he is most famous for his paintings depicting children and the multi-volume collection of Buddhist-inspired art, Paintings for the Preservation of Life (护生画集), Feng Zikai was a prolific artist, writer, and intellectual, who made strides in the fields of music, art, literature, philosophy, and translation.
Read more or edit on Wikipedia