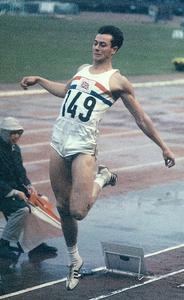 Lynn Davies CBE (born 20 May 1942) is a Welsh former track and field athlete who specialised in the long jump. He was the 1964 Olympic champion in the event. He was born in Nantymoel near Bridgend and was a member of the Cardiff Amateur Athletic Club.Davies won an Olympic gold medal in the long jump in 1964 with a mark of 8.07 metres (26 ft 6 in), earning himself the nickname "Lynn the Leap". He finished ninth in 1968, having been flag bearer at the opening ceremony. In 1964 he also competed in the 100 metres and 4×100 metres contests. He was 18th in the 1972 Olympic long jump, his selection being something of a surprise at the time.Outside the Olympics, Davies was the 1966 European champion in the long jump and was the silver medallist three years later. He was also twice the Commonwealth Games champion, winning titles in 1966 and 1970 (becoming the first man to win that title two times).Davies was twice a winner of the BBC Wales Sports Personality of the Year award, taking the honour in 1964 and 1966. After retiring from competitions in 1973 he became technical director of Canadian athletics until 1976 and later prepared the British team for the Moscow Olympics. Davies was created a CBE on 17 June 2006, having previously received an MBE in 1967. He was elected unopposed as President of the UK Athletics Members Council for a further four years following the close of nominations.
Read more or edit on Wikipedia