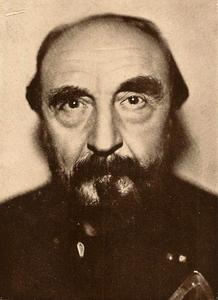 J.-H. Rosny aîné was the pseudonym of Joseph Henri Honoré Boex (17 February 1856 – 11 February 1940), a French author of Belgian origin who is considered one of the founding figures of modern science fiction. Born in Brussels in 1856, he wrote in the French language, together with his younger brother Séraphin Justin François Boex under the pen name J.-H. Rosny until 1909. After they ended their collaboration Joseph Boex continued to write under the name "Rosny aîné" (Rosny the Elder) while his brother used J.-H. Rosny jeune (Rosny the Younger).
Read more or edit on Wikipedia