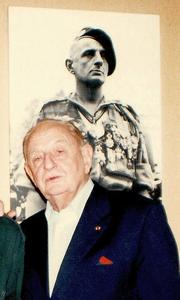 Marcel "Bruno" Bigeard (14 February 1916 – 18 June 2010) was a French military officer who fought in World War II, Indochina and Algeria. He was one of the commanders in the Battle of Dien Bien Phu and is thought by many to have been a dominating influence on French 'unconventional' warfare thinking from that time onwards. He was one of the most decorated soldiers in France, and is particularly noteworthy because of his rise from being a regular soldier in 1936 to ultimately finishing his career in 1976 as a Lieutenant General (Général de corps d'armée). A former member of the French Resistance, he is associated mainly with the wars in Indochina and Algeria.
Read more or edit on Wikipedia