Atâ-Malek Juvayni (1226–1283) (Persian: عطاملک جوینی‎), in full, Ala al-Din Ata-ullah (علاءالدین عطاءالله), was a Persian historian who wrote an account of the Mongol Empire entitled Tarīkh-i Jahān-gushā (History of the World Conqueror). He was born in Joveyn, a city in Khorasan in eastern Persia. Both his grandfather and his father, Baha al-Din, had held the post of sahib-divan or Minister of Finance for Muhammad Jalal al-Din and Ögedei Khan respectively. Baha al-Din also acted as deputy c. 1246 for his immediate superior, the emir Arghun, in which role he oversaw a large area including Kingdom of Georgia. Juvayni too became an important official of the empire. He visited the Mongol capital of Karakorum twice, beginning his history of the Mongols conquests on one such visit (c. 1252-53). He was with Ilkhan Hulagu in the 1256 campaign at the taking of Alamut and was responsible for saving part of its celebrated library. He had also accompanied Hulagu during the sack of Baghdad in 1258, and the next year was appointed governor of Baghdad, Lower Mesopotamia, and Khuzistan. Around 1282, Juvayni attended a Mongol quriltai, or assembly, held in the Ala-Taq pastures northeast of Lake Van. He died the following year in Mughan or Arran in Azerbaijan. 150 years after the castle of Alamut became the headquarters of the Nizaris, ʿAṭā-Malik Juwaynī, who was Hūlāgū Khān’s attendant and historian, visited the well-known Alamut library. He tells us about the plethora of Ismaili religious books and texts he found there, writing about the extensive literary production. However, when the Mongols invaded Alamut and destroyed the Ismaili capital, the library of Alamut was burned. Only copies of the Qurʾān and a few other treatises were saved. Juvayni's brother was the powerful Shams al-Din Mohammad Sahib-Divan, who had served as Minister of Finance under Hulagu and Abaqa Khan. A skillful leader in his own right, Shams al-Din also had influential in-laws: his wife Khoshak was the daughter of Avag Mkhargrdzeli, Lord High Constable of Georgia, and Gvantsa, a noblewoman who went on to become queen of Georgia. Juvayni's own position at court and his family connections made him privy to information unavailable to other historians. For unknown reasons Juvayni's history terminates in 1260, more than twenty years before his death. While Juvayni’s history is valuable, it is important to recognize the discrepancies, bias and errors present. For instance, his biases and selectivity are present in his description of what he believes to be the pinnacle of the Mongol conquest, the obliteration of the Ismailis, while neglecting to mention the fact that the Mongols sacked Baghdad and overthrew his Sunni ‘Abbasid co-religionists in 656/1258. Furthermore, his conclusion that “of [the Nizari Imam’s] stock no trace was left, and he and his kindred became but a tale on men’s lips and a tradition in the world” is rebuked when we later learn that the descendants of the Imam were still alive. In fact, a son by the title of “Naw Dawlat” or “Abu Dawlat” managed to reconquer Alamut in 674/1275. The integrity of Juvayni’s narrative is also questioned as it contradicts his own testament about a single son of the Nizari Imam Rukn al-Din.The standard edition of Juvayni's history is published under the title Tarīkh-i Jahān-gushā, ed. Mirza Muhammad Qazwini, 3 vol, Gibb Memorial Series 16 (Leiden and London, 1912–37). An English translation by John Andrew Boyle The History of the World-Conqueror was republished in 1997.
Read more or edit on Wikipedia 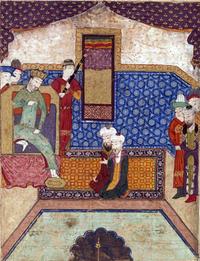