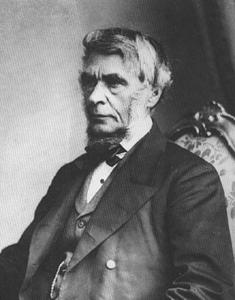 George Bentham (22 September 1800 – 10 September 1884) was an English botanist, described by the weed botanist Duane Isely as "the premier systematic botanist of the nineteenth century". Born into a distinguished family, he initially studied law, but had a fascination with botany from an early age, which he soon pursued, becoming president of the Linnaean Society in 1861, and a fellow of the Royal Society in 1862. He was the author of a number of important botanical works, particularly flora. He is best known for his taxonomic classification of plants in collaboration with Joseph Dalton Hooker, his Genera Plantarum (1862–1883). He died in London in 1884.
Read more or edit on Wikipedia