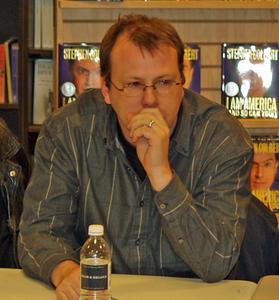 Richard Dahm (often credited as Rich Dahm) is an American comedy writer from Wisconsin. Currently a Co-Executive Producer on the sitcom The Middle, he was formerly Co-Executive Producer and Head Writer for The Colbert Report. He also wrote for Dennis Miller Live and Da Ali G Show. He has won the Primetime Emmy Award for Outstanding Writing for a Variety Series four times for The Colbert Report in 2008, 2010, 2013, and 2014, and nominated six further times for Colbert and Da Ali G Show.
Read more or edit on Wikipedia