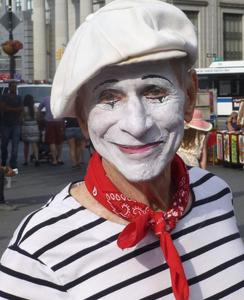 Richmond Shepard (24 April 1929 – 2 July 2019) was an American writer, director, producer and mime with a 50-year history in entertainment. He was one of the oldest living working mimes in show business. He built, owned and operated his own theaters in Los Angeles on Theatre Row where he produced over 30 shows. He moved to New York and worked as a theatre and film critic for WNEW, conceived and directed the off-Broadway show Noo Yawk Tawk at The Village Gate for three years. He traveled across the world performing with mime troupes and performs improvisational comedy in various clubs around NYC. Richmond Shepard's last role was when he played the "Sandman" in Fuzz on the Lens Productions fantasy comedy Abnormal Attraction starring Malcolm McDowell, Bruce Davison, Leslie Easterbrook, and Gilbert Gottfried which was released on 26 February 2019.
Read more or edit on Wikipedia