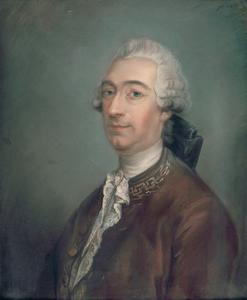 Claude Prosper Jolyot de Crébillon (February 13, 1707 – April 12, 1777), called "Crébillon fils" (to distinguish him from his father), was a French novelist. Born in Paris, he was the son of a famous tragedian, Prosper Jolyot de Crébillon. He received a Jesuit education at the elite Lycée Louis-le-Grand. Early on he composed various light works, including plays for the Italian Theatre in Paris, and published a short tale called Le Sylphe in 1730. From 1729 to 1739 he participated in a series of dinners called "Le Caveau" (named after the cabaret where they were held) with other artists, including Alexis Piron, Charles Collé, and Charles Duclos. The publication of Tanzaï et Néadarné, histoire japonaise (1734), which contained thinly veiled attacks on the Papal bull Unigenitus, the cardinal de Rohan and others, landed him briefly in the prison at Vincennes. His novel Les Égarements du cœur et de l'esprit was published between 1736 and 1738 and was, although he continued to edit it in 1738, never finished. Publication of Le Sopha, conte moral, an erotic political satire, in 1742 forced him into exile from Paris for several months.Around 1744 he entered into a romantic liaison with Lady Henrietta Maria Stafford, daughter of a Jacobite chamberlain, and they were married in 1748. A son was born in 1746 and died in 1750. Despite financial hardship, they lived together until her death in 1755. Meanwhile, he published La Nuit et le moment (1745), Ah! quel conte! and Les Heureux Orphelins (1754). Inheriting nothing from Henriette, he was forced to sell his large library in 1757 and eventually found steady income as a royal censor (like his father) in 1759. In 1768 and 1772 he published his last two novels, Lettres de la duchesse de *** au duc de *** and Lettres athéniennes.
Read more or edit on Wikipedia 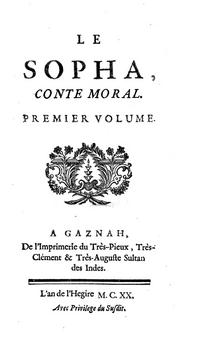 The Sofa: A Moral Tale