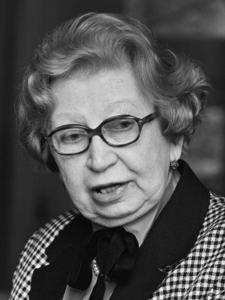 country of citizenship: Kingdom of the Netherlands
native language: Dutch
languages spoken, written or signed: Dutch
occupation: writer, resistance fighter
award received: Officer's Cross of the Order of Merit of the Federal Republic of Germany, Grand Decoration of Honour for Services to the Republic of Austria, Knight of the Order of Orange-Nassau, Jan Karski Courage to Care Award, Raoul Wallenberg Award, Righteous Among the Nations
www.miepgies.nl

Hermine "Miep" Gies (Dutch pronunciation: [mip ˈxis]; née Santrouschitz; 15 February 1909 – 11 January 2010) was one of the Dutch citizens who hid Anne Frank, her family (Otto Frank, Margot Frank, Edith Frank-Holländer) and four other Dutch Jews (Fritz Pfeffer, Hermann van Pels, Auguste van Pels, Peter van Pels) from the Nazis in an annex above Otto Frank's business premises during World War II. She was Austrian by birth, but in 1920, at the age of eleven, she was taken in as a foster child by a Dutch family to whom she became very attached. Although she was initially only to stay for six months, this stay was extended to one year because of frail health, after which Gies chose to remain with them, living the rest of her life in the Netherlands. She died in 2010 at age 100, a month before her 101st birthday. In 1933, Gies began working for Otto Frank, a Jewish businessman who had moved with his family from Germany to the Netherlands in the hope of sparing his family from Nazi persecution. She became a close, trusted friend of the Frank family and was a great support to them during the two years they spent in hiding. Together with her colleague Bep Voskuijl, she retrieved Anne Frank's diary after the family was arrested, and kept the papers safe until Otto Frank returned from Auschwitz in June 1945 and learned of his younger daughter's death. Gies had stored Anne Frank's papers in the hopes of returning them to the girl, but gave them to Otto Frank, who compiled them into a diary first published in 1947. In collaboration with Alison Leslie Gold, Gies wrote the book Anne Frank Remembered: The Story of the Woman Who Helped to Hide the Frank Family in 1987.
Read more or edit on Wikipedia