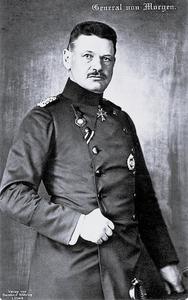 Curt Ernst von Morgen (1 November 1858 in Neiße – 15 February 1928 in Lübeck) was a Prussian explorer and officer, later General of Infantry during World War I. He was a recipient of Pour le Mérite with Oak Leaves.
Read more or edit on Wikipedia