Robert Daniel San Souci (October 10, 1946 – December 19, 2014) was a multiple award-winning children's book author, who resided in San Francisco, California. He often worked with his brother, Daniel San Souci, a children's book illustrator. He was a consultant to Disney Studios and was instrumental in the production of the film Mulan, for which he wrote the story. He studied folklore in graduate school. He died after suffering a head injury while falling from a high height in San Francisco in December 2014.
Read more or edit on Wikipedia

Dare to Be Scared

The Talking Eggs: A Folktale from the American South

The Hired Hand: An African-American Folktale 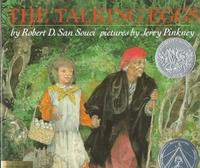