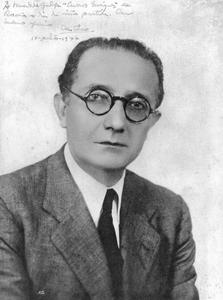 Alfonso Daniel Manuel Rodríguez Castelao (30 January 1886 – 7 January 1950), commonly known as Castelao, was a Spanish politician, writer, painter and doctor. He is one of the fathers of Galician nationalism, promoting Galician identity and culture, and was one of the main names behind the cultural movement Xeración Nós. He was also one of the founders and president of the Galicianist Party.
Read more or edit on Wikipedia