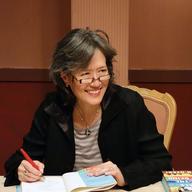 Ruth Ozeki is an American-Canadian author, filmmaker and Zen Buddhist priest. Her books and films, including the novels My Year of Meats (1998), All Over Creation (2003), A Tale for the Time Being (2013), and The Book of Form and Emptiness (2021) seek to integrate personal narrative and social issues, and deal with themes relating to science, technology, environmental politics, race, religion, war and global popular culture. Her novels have been translated into more than thirty languages. She teaches creative writing at Smith College where she is the Grace Jarcho Ross 1933 Professor of Humanities in the Department of English Language and Literature. Her real name is Ruth Diana Lounsbury. Ozeki is a pseudonym, taken from her former boyfriend's last name. Source: Wikipedia (en)