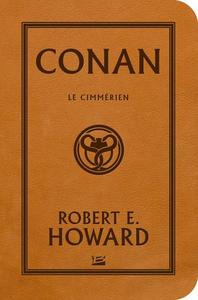 Conan of Cimmeria is a collection of eight fantasy short stories written by Robert E. Howard, L. Sprague de Camp and Lin Carter featuring Howard's sword and sorcery hero Conan the Barbarian. Most of the stories were originally published in various fantasy magazines. The book was first published in paperback by Lancer Books in 1969, and reprinted in 1970, 1972 and 1973. After the bankruptcy of Lancer, publication was taken over by Ace Books. Its first edition was published in May 1977, and was reprinted in August 1977, 1979, 1980, 1982 (twice), 1984, 1985, 1990 and 1993. The first British edition was published by Sphere Books in 1974, and was reprinted in 1976 and 1987. The book has also been translated into German, Japanese, Spanish, Dutch, Swedish and Italian. It was gathered together with Conan and Conan the Freebooter into the omnibus collection The Conan Chronicles (Sphere Books, August 1989).
Read more or edit on Wikipedia