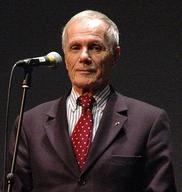 Pierre Schoendoerffer (French: Pierre Schœndœrffer; 5 May 1928 – 14 March 2012) was a French film director, a screenwriter, a writer, a war reporter, a war cameraman, a renowned First Indochina War veteran, a cinema academician. He was president of the Académie des Beaux-Arts for 2001 and for 2007.In 1967, he was the winner of the Academy Award for Best Documentary Feature for The Anderson Platoon. The film followed a platoon of American soldiers for six weeks at the height of fighting in Vietnam during 1966. Source: Wikipedia (en)