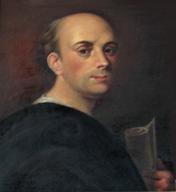 Scipione Piattoli (Italian pronunciation: [ʃiˈpjoːne ˈpjattoli]; 10 November 1749 – 12 April 1809) was an Italian Catholic priest—a Piarist—an educator, writer, and political activist, and a major figure of the Enlightenment in Poland. After ten years as a professor at the University of Modena in Italy, he emigrated to the Polish–Lithuanian Commonwealth, where he became associated with several magnate families—the Potockis, Lubomirskis, and Czartoryskis. He was a member of Duchess Dorothea von Medem's court in Courland (Lithuania) and of King Stanisław August Poniatowski's court. Piattoli was politically active in Warsaw during and after the Four-Year Sejm (1788–92). He served as intermediary between the reformist Patriotic Party and King Stanisław August Poniatowski, and as an aide to the King (1789–93). He is best remembered for his participation in drafting the Constitution of 3 May 1791, a milestone in the history of Polish political legislation. He was an organizer of the 1794 Kościuszko Insurrection against Russian influence, which was the last armed struggle held under the banners of the Commonwealth. After the Third Partition of Poland (1795), Piattoli was interned by the Austrians for several years, together with another Polish activist of the Constitution movement, Hugo Kołłątaj. Freed in 1800, he worked several years with Polish and Russian statesman Prince Adam Jerzy Czartoryski in the service of Russia, before retiring to Courland. Piattoli was an inspiration to Leo Tolstoy, who based the figure of Abbé Morio in War and Peace (1869) on him. He is also one of the figures immortalized in Jan Matejko's 1891 painting, Constitution of 3 May 1791. In his 1980 ten-page entry on Piattoli in the Polish Biographical Dictionary, historian Emanuel Rostworowski notes that, “despite two Italian monographs (by A.D. Ancon and G. Bozzolato)”, Piattoli still awaits a definitive biography. Source: Wikipedia (en)