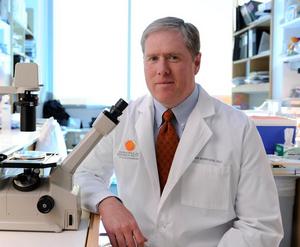 Sean J. Morrison is a Canadian-American stem cell biologist and cancer researcher. Morrison is the director of Children's Medical Center Research Institute at UT Southwestern, a nonprofit research institute established in 2011 as a joint venture between Children’s Health System of Texas and UT Southwestern Medical Center. The CRI was established in 2011 by Morrison with the mission to perform transformative biomedical research at the interface of stem cell biology, cancer, and metabolism to better understand the biological basis of disease. He is a Howard Hughes Medical Institute Investigator and member of the National Academy of Medicine. From 2015 to 2016 Morrison served as the president of the International Society for Stem Cell Research.Morrison’s research group studies the mechanisms that regulate stem cell function in adult tissues and the ways in which cancer cells hijack those mechanisms to enable tumor formation.
Read more or edit on Wikipedia

CD4 is expressed on a heterogeneous subset of hematopoietic progenitors, which persistently harbor CXCR4 and CCR5-tropic HIV proviral genomes in vivo. ( 2017 )