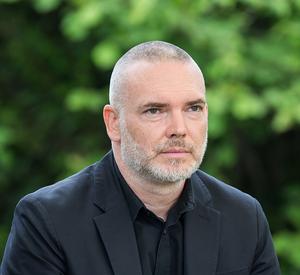 Sebastijan Pregelj (born 29 July 1970) is a Slovenian writer. In the second half of the 1990s Sebastijan Pregelj (b.1970) called attention to himself with his collections of short stories. During the last ten years, he has undoubtedly proven his mastery of storytelling with his novels. Five of them earned him nominations for Best Novel of the Year Award (the Kresnik Award). A wide variety of readers is drawn to his novels because of their broad and rich historical background, intertwined with legends as well as present-day reality that manage to combine the magical with the spiritual and the mystical. In 2020 Pregelj won The Cankar Prize, a new literature award for the most original piece of literature from the previous year - either fiction, play, essay or poetry, for »V Elvisovi Sobi«, a novel about a generation which was growing up while the former Yugoslavia was slowly disintegrating. Sebastijan Pregelj has been featured in several anthologies in the Slovene, Slovak, German, Polish and English language. He is a member of the Slovenian Writers’ Association and Slovene PEN centre. He lives and works in Ljubljana.
Read more or edit on Wikipedia