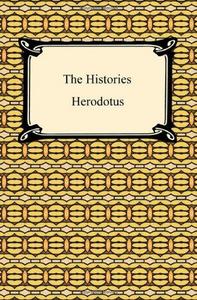 The Histories (Greek: Ἱστορίαι; Ancient Greek: [historíai̯]; also known as The History) of Herodotus is considered the founding work of history in Western literature. Written in 430 BC in the Ionic dialect of classical Greek, The Histories serves as a record of the ancient traditions, politics, geography, and clashes of various cultures that were known in Greece, Western Asia and Northern Africa at that time. Although not a fully impartial record, it remains one of the West's most important sources regarding these affairs. Moreover, it established the genre and study of history in the Western world (despite the existence of historical records and chronicles beforehand). The Histories also stands as one of the earliest accounts of the rise of the Persian Empire, as well as the events and causes of the Greco-Persian Wars between the Persian Empire and the Greek city-states in the 5th century BC. Herodotus portrays the conflict as one between the forces of slavery (the Persians) on the one hand, and freedom (the Athenians and the confederacy of Greek city-states which united against the invaders) on the other. The Histories was at some point divided into the nine books that appear in modern editions, conventionally named after the nine Muses. On the legacy of The Histories by Herodotus, historian Barry S. Strauss writes: He is simply one of the greatest storytellers who ever wrote. His narrative ability is one of the reasons...those who call Herodotus the father of history. Now that title is one that he richly deserves. A Greek who lived in the fifth century BC, Herodotus was a pathfinder. He traveled the eastern Mediterranean and beyond to do research into human affairs: from Greece to Persia, from the sands of Egypt to the Scythian steppes, and from the rivers of Lydia to the dry hills of Sparta. The Greek for “research” is historia, where our word “history” comes from ... Herodotus is a great historian. His work holds up very well when judged by the yardstick of modern scholarship. But he is more than a historian. He is a philosopher with three great themes: the struggle between East and West, the power of liberty, and the rise and fall of empires. Herodotus takes the reader from the rise of the Persian Empire to its crusade against Greek independence, and from the stirrings of Hellenic self-defense to the beginnings of the overreach that would turn Athens into a new empire of its own. He goes from the cosmos to the atom, ranging between fate and the gods, on the one hand, and the ability of the individual to make a difference, on the other. And then there is the sheer narrative power of his writing...The old master keeps calling us back.
Read more or edit on Wikipedia