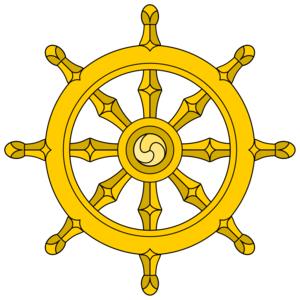 Buddhism ( BUU-dih-zəm, BOOD-), also known as Buddha Dharma and Dharmavinaya (transl. "doctrines and disciplines"), is an Indian religion or philosophical tradition based on teachings attributed to the Buddha. It originated in present-day North India as a śramaṇa–movement in the 5th century BCE, and gradually spread throughout much of Asia via the Silk Road. It is the world's fourth-largest religion, with over 520 million followers (Buddhists) who comprise seven percent of the global population.The Buddha taught the Middle Way, a path of spiritual development that avoids both extreme asceticism and hedonism. It aims at liberation from attachment or clinging to that which is impermanent (anitya), incapable of satisfying (duḥkha), and without a lasting essence (anātman). A summary of this path is expressed in the Noble Eightfold Path, a training of the mind through observance of Buddhist ethics and meditation, with the intention of ending the cycle of death and rebirth (saṃsāra). Other widely observed practices include: monasticism; "taking refuge" in the Buddha, the dharma, and the saṅgha; and the cultivation of perfections (pāramitā).Two major extant branches of Buddhism are generally recognized by scholars: Theravāda (lit. 'School of the Elders') and Mahāyāna (lit. 'Great Vehicle'). The Theravāda branch has a widespread following in Sri Lanka as well as in Southeast Asia (namely Myanmar, Thailand, Laos, and Cambodia). The Mahāyāna branch—which includes the traditions of Zen, Pure Land, Nichiren, Tiantai, Tendai, and Shingon—is predominantly practiced in Nepal, Bhutan, China, Malaysia, Vietnam, Taiwan, Korea, and Japan. Additionally, Vajrayāna (lit. 'Indestructible Vehicle'), a body of teachings attributed to Indian adepts; may be viewed as a separate branch or an aspect of the Mahāyāna tradition. Tibetan Buddhism, which preserves the Vajrayāna teachings of eighth-century India; is practiced in the Himalayan states as well as in Mongolia and Russian Kalmykia. Historically, until the early 2nd millennium, Buddhism was widely practiced in the Indian subcontinent; it also had a foothold to some extent elsewhere in Asia, namely Afghanistan, Uzbekistan, and the Philippines. Buddhist schools vary in their interpretation of the paths to liberation (mārga) as well as the relative importance and canonicity assigned to various Buddhist texts, and their specific teachings and practices. The Theravada Buddhist tradition emphasizes transcending the individual self through the attainment of nirvāṇa (lit. 'quenching'), while the Mahayana tradition emphasizes the Bodhisattva-ideal.
Read more or edit on Wikipedia