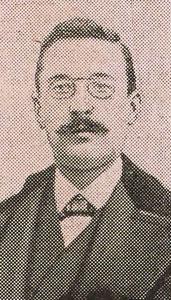 Louis de Robert (5 March 1871, Paris – 27 September 1937) was a French writer, winner of the prix Femina in 1911. He became friends with Émile Zola during the Dreyfus Affair and took a stand for the revision of the trial.A regular collaborator in The Journal, with Jules Renard, Alphonse Allais, Octave Mirbeau, he was the first reader of the proofs of Du côté de chez Swann, and dissuaded his friend Marcel Proust to shorten his novel. Le Roman du malade, serialized in Le Figaro then published by the Éditions Fasquelle, Prix Femina 1911, the novel was admired by Maurice Barres, Anna de Noailles, Robert de Montesquiou and Colette. He won the Prix of the Académie française Fallen in love with the thirty years younger Jeanne Humbert, he married her at the town hall of Sannois on November 8, 1928. She survived him more than half a century and published her autobiography Le cœur a ses raisons in 1986, on vanity press.
Read more or edit on Wikipedia