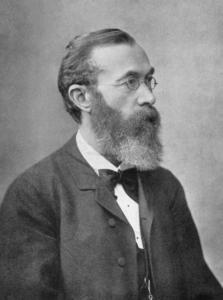 Wilhelm Maximilian Wundt (; German: [vʊnt]; 16 August 1832 – 31 August 1920) was a German physiologist, philosopher, and professor, known today as one of the founders of modern psychology. Wundt, who distinguished psychology as a science from philosophy and biology, was the first person ever to call himself a psychologist. He is widely regarded as the "father of experimental psychology". In 1879, at University of Leipzig, Wundt founded the first formal laboratory for psychological research. This marked psychology as an independent field of study. By creating this laboratory he was able to establish psychology as a separate science from other disciplines. He also formed the first academic journal for psychological research, Philosophische Studien (from 1881 to 1902), set up to publish the Institute's research.A survey published in American Psychologist in 1991 ranked Wundt's reputation as first for "all-time eminence" based on ratings provided by 29 American historians of psychology. William James and Sigmund Freud were ranked a distant second and third.
Read more or edit on Wikipedia