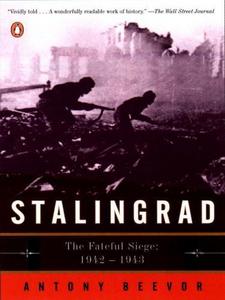 Stalingrad is a narrative history written by Antony Beevor of the battle fought in and around the city of Stalingrad during World War II, as well as the events leading up to it. It was first published by Viking Press in 1998. The book won the first Samuel Johnson Prize, the Wolfson History Prize and the Hawthornden Prize for Literature in 1999.
Read more or edit on Wikipedia