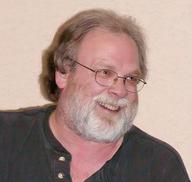 Stephen W. Leigh (born February 27, 1951) is an American science fiction and fantasy writer, artist, and musician. He also works as a lecturer at Northern Kentucky University, teaching creative writing. He has published speculative fiction as Stephen Leigh, as S. L. Farrell, and once as Matthew Farrell.Steve Leigh was born in Cincinnati, Ohio, and lives there. He plays guitar and sings in a band named Toast. Source: Wikipedia (en)