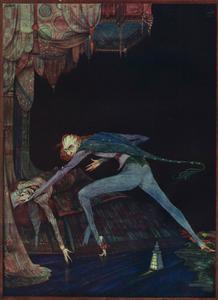 "The Tell-Tale Heart" is a short story by American writer Edgar Allan Poe, first published in 1843. It is related by an unnamed narrator who endeavors to convince the reader of the narrator's sanity while simultaneously describing a murder the narrator committed. The victim was an old man with a filmy pale blue "vulture-eye", as the narrator calls it. The narrator emphasizes the careful calculation of the murder, attempting the perfect crime, complete with dismembering the body in the bathtub and hiding it under the floorboards. Ultimately, the narrator's actions result in hearing a thumping sound, which the narrator interprets as the dead man's beating heart. The story was first published in James Russell Lowell's The Pioneer in January 1843. "The Tell-Tale Heart" is often considered a classic of the Gothic fiction genre and is one of Poe's best known short stories. The specific motivation for murder (aside from the narrator's hatred of the old man's eye), the relationship between narrator and old man, the gender of the narrator, and other details are left unclear. The narrator denies having any feelings of hatred or resentment for the man who had, as stated, "never wronged" the narrator. The narrator also denies having killed for greed. Critics argue that the old man could be a father figure, the narrator's landlord, or that the narrator works for the old man as a servant, and that perhaps his "vulture-eye" represents a veiled secret or power. The ambiguity and lack of details about the two main characters stand in contrast to the specific plot details leading up to the murder.
Read more or edit on Wikipedia