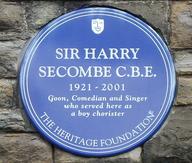 Sir Harold Donald Secombe (8 September 1921 – 11 April 2001) was a Welsh comedian, actor, singer and television presenter. Secombe was a member of the British radio comedy programme The Goon Show (1951–1960), playing many characters, most notably Neddie Seagoon. An accomplished tenor, he also appeared in musicals and films – notably as Bumble in Oliver! (1968) – and, in his later years, was a presenter of television shows incorporating hymns and other devotional songs. Source: Wikipedia (en)