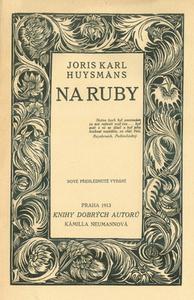 À rebours (French pronunciation: ​[a ʁ(ə).buʁ]; translated Against Nature or Against the Grain) (1884) is a novel by the French writer Joris-Karl Huysmans. The narrative centers on a single character: Jean des Esseintes, an eccentric, reclusive, ailing aesthete. The last scion of an aristocratic family, Des Esseintes loathes nineteenth-century bourgeois society and tries to retreat into an ideal artistic world of his own creation. The narrative is almost entirely a catalogue of the neurotic Des Esseintes's aesthetic tastes, musings on literature, painting, and religion, and hyperaesthesic sensory experiences. À rebours contains many themes that became associated with the Symbolist aesthetic. In doing so, it broke from Naturalism and became the ultimate example of "Decadent" literature, inspiring works such as Oscar Wilde's The Picture of Dorian Gray (1890). In his preface for the 1903 publication of the novel, Huysmans wrote that he had the idea to portray a man "soaring upwards into dream, seeking refuge in illusions of extravagant fantasy, living alone, far from his century, among memories of more congenial times, of less base surroundings ... each chapter became the sublimate of a specialism, the refinement of a different art; it became condensed into an essence of jewellery, perfumes, religious and secular literature, of profane music and plain-chant."
Read more or edit on Wikipedia