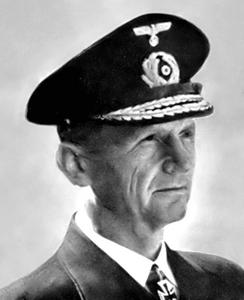 Karl Dönitz (sometimes spelled Doenitz; German: [ˈdøːnɪts] (listen); 16 September 1891 – 24 December 1980) was a German admiral during the Nazi era who briefly succeeded Adolf Hitler as the German head of state in 1945. As Supreme Commander of the Navy since 1943, he played a major role in the naval history of World War II. The Nuremberg Trials court convicted him of war crimes in 1946.He began his career in the Imperial German Navy before World War I. In 1918, he was commanding UB-68 when she was sunk by British forces. Dönitz was taken prisoner. While in a prisoner of war camp, he formulated what he later called Rudeltaktik ("pack tactic", commonly called "wolfpack"). At the start of World War II, he was the senior submarine officer in the Kriegsmarine, known as Befehlshaber der Unterseeboote (BdU). In January 1943, Dönitz achieved the rank of Großadmiral (grand admiral) and replaced Grand Admiral Erich Raeder as Commander-in-Chief of the Navy. Dönitz was the main enemy of Allied naval forces in the Battle of the Atlantic. From 1939–1943 the U-boats fought effectively but lost the initiative from May 1943. Dönitz ordered his submarines into battle until 1945 to relieve the pressure on other branches of the Wehrmacht (Nazi German Armed Force). 648 U-boats were lost—429 with no survivors. A further 215 were lost on their first patrol. Around 30,000 of the 40,000 men to serve on U-boats perished.On 30 April 1945, after the death of Adolf Hitler and in accordance with Hitler's last will and testament, Dönitz was named Hitler's successor as head of state, with the title of President of Germany and Supreme Commander of the Armed Forces. On 7 May 1945, he ordered Alfred Jodl, Chief of Operations Staff of the OKW, to sign the German instruments of surrender in Reims, France. Dönitz remained as head of the Flensburg Government, as it became known, until it was dissolved by the Allied powers on 23 May. By his own admission, Dönitz was a dedicated Nazi and supporter of Hitler; he held anti-Semitic beliefs and insisted that Kriegsmarine officers adhere to his political views. Following the war, Dönitz was indicted as a major war criminal at the Nuremberg Trials on three counts: conspiracy to commit crimes against peace, war crimes, and crimes against humanity; planning, initiating, and waging wars of aggression; and crimes against the laws of war. He was found not guilty of committing crimes against humanity, but guilty of committing crimes against peace and war crimes against the laws of war. He was sentenced to ten years' imprisonment; after his release, he lived in a village near Hamburg until his death in 1980.
Read more or edit on Wikipedia 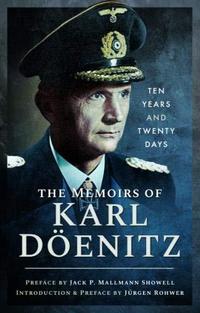