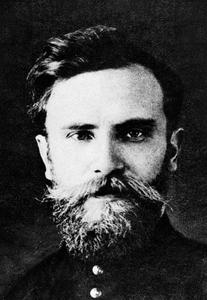 Konstantin Vladimirovich Rodzaevsky (Russian: Константи́н Влади́мирович Родзае́вский; 11 August [O.S. 29 July] 1907 – 30 August 1946) was the leader of the Russian Fascist Party, which he led in exile from Manchuria. Rodzaevsky was also the chief editor of the RFP paper Nash Put'. After the defeat of anti-communist forces in the Russian Civil War, he and his followers fled to Japanese-controlled China. He was lured by the NKVD to return to the Soviet Union with false promises of immunity and executed after a trial in a Lubyanka prison cellar for "anti-Soviet and counter-revolutionary activities".
Read more or edit on Wikipedia