Tarun Khanna (born; 1968) is an Indian-born American academic, author, and an economic strategist. He is currently the Jorge Paulo Lemann professor at Harvard Business School; where he is a member of the strategy group, and the director of Harvard University’s South Asia initiative since 2010.He joined the HBS faculty in 1993; after obtaining a B.S. degree in electrical engineering & computer science from Princeton University (1988), and a Ph.D. in business economics from Harvard Business School (1993). His areas of interests include diasporas, economic development, emerging markets, globalization, international business, and strategy. Khanna has authored several scholarly works, articles and books; with the most notable being, his 2008 book - Billions of Entrepreneurs: How China and India are Reshaping Their Futures and Yours, and 2010 co-authored book - Winning in Emerging Markets: A Roadmap for Strategy and Execution. In 2007, he was nominated to be a young global leader (under 40) by the World Economic Forum; and in 2009, elected as a fellow of the Academy of International Business. Khanna also sits on the boards of AES Corporation, SKS Microfinance, Aragen Life Sciences and TVS Logistics.
Read more or edit on Wikipedia 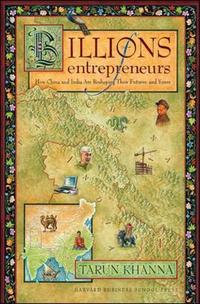 Billions of Entrepreneurs: How China and India are Reshaping Their Futures and Yours