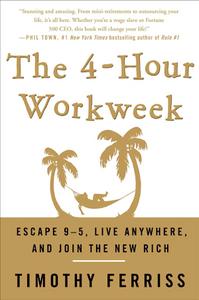 The 4-Hour Workweek: Escape 9–5, Live Anywhere, and Join the New Rich (2007) is a self-help book by Timothy Ferriss, an American writer, educational activist, and entrepreneur. The book has spent more than four years on The New York Times Best Seller List, has been translated into 40 languages and has sold more than 2.1 million copies worldwide. It deals with what Ferriss refers to as "lifestyle design" and repudiates the traditional "deferred" life plan in which people work grueling hours and take few vacations for decades and save money in order to relax after retirement.
Read more or edit on Wikipedia