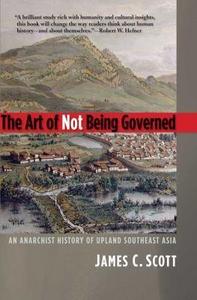 The Art of Not Being Governed

The Art of Not Being Governed: An Anarchist History of Upland Southeast Asia is a book-length anthropological and historical study of the Zomia highlands of Southeast Asia written by James C. Scott published in 2009. Zomia, as defined by Scott, includes all the lands at elevations above 300 meters stretching from the Central Highlands of Vietnam to Northeastern India. That encompasses parts of Vietnam, Cambodia, Laos, Thailand, and Myanmar, as well as four provinces of China. Zomia's 100 million residents are minority peoples "of truly bewildering ethnic and linguistic variety", he writes. Among them are the Akha, Hmong, Karen, Lahu, Mien, and Wa peoples.
Read more or edit on Wikipedia