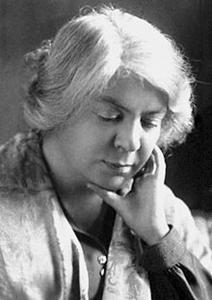 Grazia Maria Cosima Damiana Deledda (Italian pronunciation: [ˈɡrattsja deˈlɛdda]; 27 September 1871 – 15 August 1936), also known in Sardinian language as Gràssia or Gràtzia Deledda (pronounced [ˈɡɾa(t)si.a ðɛˈlɛɖːa]), was an Italian writer who received the Nobel Prize for Literature in 1926 "for her idealistically inspired writings which with plastic clarity picture the life on her native island [i.e. Sardinia] and with depth and sympathy deal with human problems in general". She was the first Italian woman to receive the prize, and only the second woman in general after Selma Lagerlöf was awarded hers in 1909.
Read more or edit on Wikipedia